Shadow of the Eagle (Amanda Cockrell) 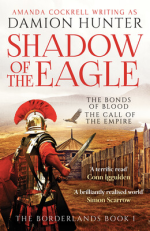 Will Britain take him in... or mark him as its enemy?

Faustus Valerianus is the son of a Roman father and a British mother, a captive sold among the spoils after Claudius’s invasion. Now both parents have died within a month of each other, and so he sells the family farm and enlists, joining legendary general Agricola’s campaign to conquer the entirety of the British Isles culminating in a devastating battle amongst Caledonia's dark mountains. But Faustus will have to contend with more than ferocious British warriors and whip-cracking elements. For the bonds of blood can weigh heavy on one’s soul. The call of his mother’s true people. His father’s restless shadow. Faustus must carry them with him…

AUTHOR BIO Amanda Cockrell, writing as Damion Hunter, is the author of seven previous Roman novels. Shadow of the Eagle is the first in The Borderlands, a new Roman series. She grew up in Ojai, California, and developed a fascination with the Romans when a college friend gave her Rosemary Sutcliff’s books to read. She taught literature and creative writing for many years at Hollins University in Roanoke, Virginia, where she now lives.