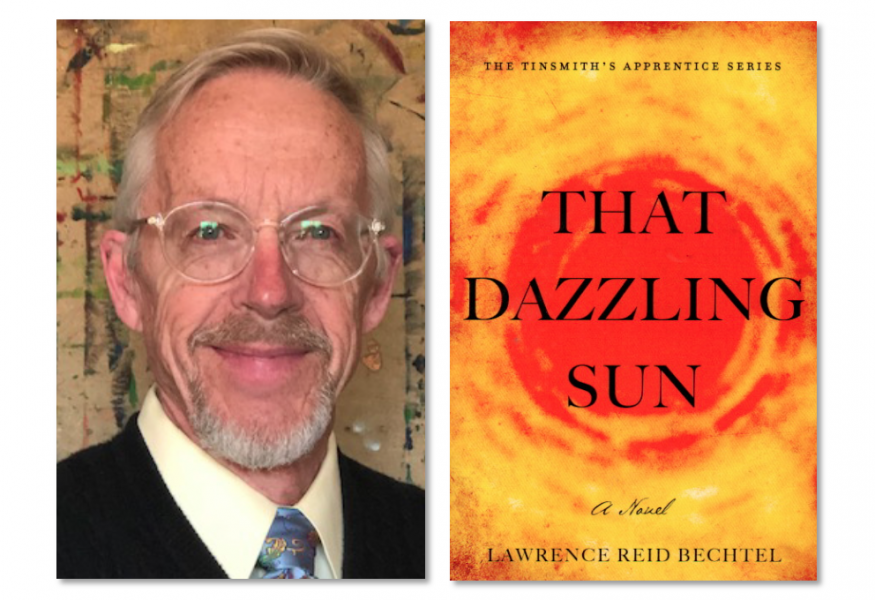 Author Lawrence Bechtel of Blacksburg VA read from, discussed, and took questions about his recently released novel That Dazzling Sun in a virtual event Saturday, August 29. The novel is the sequel to A Partial Sun. These books, first two in the Tinsmith’s Apprentice trilogy, tell the story of Isaac Granger, an enslaved laborer owned by Thomas Jefferson, and his experiences in 1790 travelling to Philadelphia, where he worked as a tinsmith’s apprentice.

Bechtel is a former English Instructor at Virginia Tech and accomplished sculptor. He has a special interest in the African American experience during the Federal Era immediately following the Revolutionary War. While researching Thomas Jefferson, Bechtel discovered an 1840’s-era image of Isaac Granger and his brief memoir. The discovery led Bechtel to sculpt a portrait bust of Isaac and then write the novels.  He is currently working on the final volume of the series, A Slow Eclipse, and writing a collection of related short stories, Wade in the Waters.

That Dazzling Sun, Book 2 in The Tinsmith's Apprentice trilogy, continues the vivid coming-of-age story of Isaac Granger, slave to Thomas Jefferson, begun in Bechtel's debut novel, A Partial Sun. In that book, Isaac begins his complicated apprenticeship at age fifteen as a tinsmith in Philadelphia in the fall of 1790.

In this second book, Rachel Bringhouse, the tinsmith's daughter and Isaac's tutor, sails off to England to work alongside the famous social activist and poet, Hannah Moore. She writes enthusiastic letters to Isaac which he answers with assistance from George Washington’s irrepressible cook's helper, Ovid. Meanwhile, Billey Gardner, the feisty and opportunistic former slave of James Madison, pesters Isaac with notions of a business partnership; the charismatic Dr. Cornelius Sharp uses Isaac to confront Jefferson as a debt-ridden slaveowner; and the Reverend Richard Allen provides Isaac with a copy of Pennsylvania’s “Gradual Abolition of Slavery Act.” When an exuberant Rachel returns from England with a key insight and Isaac's hated nemesis Daniel Shady reappears, the book rises to its climax. Isaac must gather his power and bargain on his own terms with “Old Master.” ​

That Dazzling Sun : Book 2 in The Tinsmith's Apprentice series (Paperback)