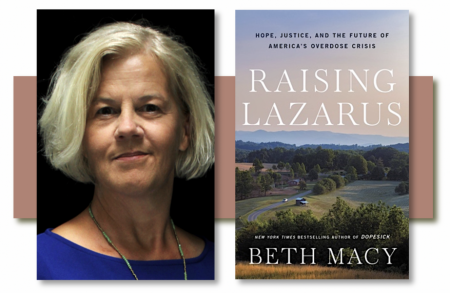 Preorder the book and receive two free admissions to the event

Join Book No Further for the local launch of Beth Macy's new book "Raising Lazarus," Monday, August 22, at 7 pm at Community High School. Subtitles Hope Justice and the Future of American's Overdose Crisis, tells the story of the everyday heroes fighting to stem the tide of addiction in communities across the country and of the individuals struggling for accountability in America's courts.

After detailing the origins of the opioid epidemic in Dopesick, Macy uses emotionally stirring portraits in her new book Raising Lazarus to explore potential solutions to the problem.  Lazarus is set in the last two years and tells the story of the people on the ground who are helping the addicted.

Esquire magazine says Macy "turns the lens to the fight for justice, from the prosecution of the Sackler family to the reformers pioneering innovative treatments for the afflicted. Enlightening and exhaustive, it’s at once a damning exposé about greed and a moving paean to the power of community activism."

Macy, an award wining journalist, worked for The Roanoke Times and has published two other books in addition to Raising Raising Lazarus and Dopesick: Truevine tells the story of George and Willie Muse, two albino African Americans who, in the early 20th Century, were taken and placed in a circus as sideshow freaks. Their mother spent more than a decade searching for them. In Factory Man, Macy tells the story of John Bassett who sued Chinese manufacturers for dumping furniture in U.S. markets.

The event will be followed by an author signing. Admission is free with purchase of the book, which includes reserved seating or $5 general public (Book No Further respectfully requests attendees not bring books purchased elsewhere to the event.)

Preorder your copy now and pick up at the event.