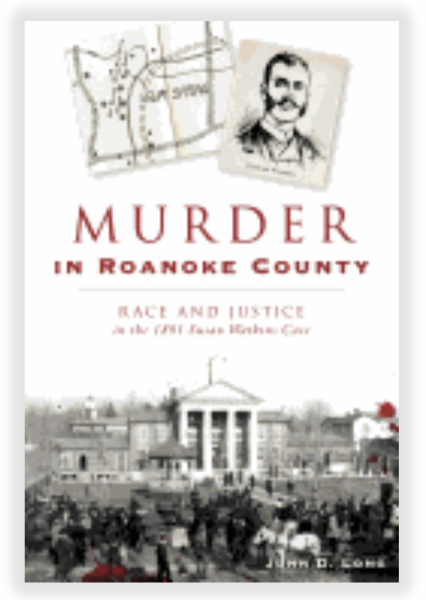 Historian John D Long will present Murder in Roanoke County, a story of "race and justice in the 1891 Susan Watkins Case," Saturday, October 26, at 1 pm at Book No Further. The book, which releases October 21, recounts the trial of Charles Watkins for the murder of his wife, and includes threats of lynching, a fugitive manhunt, a disappearing witness, mistaken identities, claims of insanity and finally a secret letter to break the case wide open.

A drama played out in the mountains of southwestern Virginia in 1891 that attracted nationwide attention and held the citizens of the Roanoke Valley spellbound. It was a story of violence, bigamy, race and a quest for justice. In its day, the story was as closely followed as a modern televised murder trial. Despite the rapt attention of the public then, it faded from history. Long searches for the truth of who killed Susan Watkins and whether someone got away with murder?

Long is the director of education at the National D-Day Memorial in Bedford, Virginia and holds degrees from Roanoke College and the University of Virginia. He has taught history at Roanoke College, Radford University and Virginia Western Community College. A contributing columnist for the Roanoke Times, he has also written extensively on local history and the Second World War.

Pre-order your copy today for 10 percent off (with code AEP191026) and reserve your seat for the event.

Murder in Roanoke County: Race and Justice in the 1891 Susan Watkins Case (Paperback)