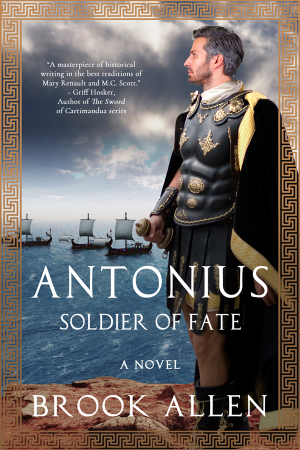 Marcus Antonius has it all—power, prestige, a heroic military reputation, and the love of Queen Cleopatra. But as master of Rome’s Eastern provinces and kingdoms, he must maintain peace, and in so doing, he sacrifices his own happiness, yoked within a loveless marriage and an eroding alliance. As Octavian’s star rises, Marcus must compete with his rival’s success, though it leads to an embittered struggle threatening to end their unity.

Once Marcus finally takes matters into his own hands, his fate becomes tied to the East—and Cleopatra. Far from Rome and his seat of power, a horrific campaign to fulfill Julius Caesar’s vision will forever alter him. He is a man torn between two countries and two families, and ultimately—a soldier fated to be the catalyst transforming Rome from Republic to Empire.

Soldier of Fate is the sequel to Antonius: Second in Command, dealing with the Antony’s tumultuous rise to power at Caesar’s side and culminating with the civil war against Brutus and Cassius. The trilogy began with Antonius: Son of Rome was published in March 2019. It follows Antony as a young man, from the age of eleven, when his father died in disgrace, until he’s twenty-seven and meets Cleopatra for the first time.

Author Brook Allen is a graduate of Asbury University and Hollins University and a member of the Historical Novel Society. Son of Rome won the Coffee Pot Book Club Book of the Year Award in 2020 and Son of Rome received a silver medal in the international Reader’s Favorite Book Reviewers Book Awards. Allen teaches music in public schools in Western Virginia.